With the change in weather and the recent snow falls I figured my choice in beers should follow in suite. So for Beer Talk 2.0 I have decided upon Hamburg Brewing Company’s Frost The IPA. Accompanying me is my beautiful wife and life long drinking partner Kim. Though we enjoy many of the same beers I have noticed on different occasions we’ve had some differing thoughts regarding certain beers. Either way, I’m sure this will be the first of many Beer Talks I do with Kim.

Let’s see where this takes us!

The Beer: Frosty the IPA by Hamburg Brewing Company

Easily found on Hamburg’s website is a funny as well as informing description of Frosty the IPA. https://www.hamburgbrewing.com/frosty-the-ipa/

‘Frosty the IPA was a jolly HOPPY brew. With a two row base, some white wheat malt, and a juiced up hop review. Frosty the IPA is a fairytale, they say. He was made of wort, but the yeast all know how he came to life one day. There must have been some magic in those shiny tanks we found, for when he came out, the brewers danced around!’ 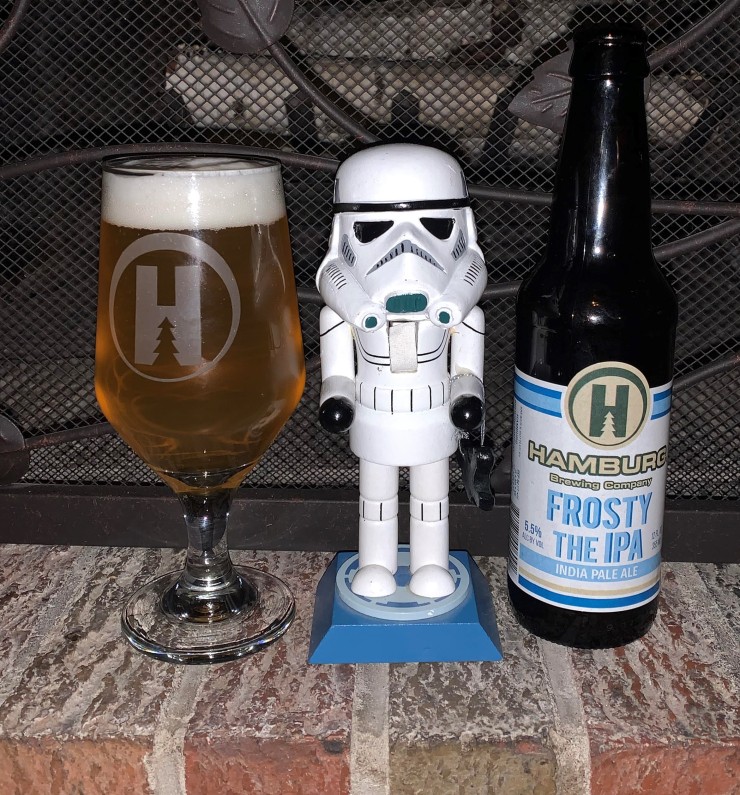 Jeff: ‘So starting off from the top,aroma and appearance.’
Kim: ‘On this description (from Hamburg’s website) it says: ‘Color: 9 SRM.’ What does that mean?’
Jeff: ‘Umm…John Lovibond was a commercial brewer whose brewery existed until 1959. His lasting legacy was his color scale which was invented in 1921.The Lovibond rating is used to convey the color of malted barely and specialty malts. The scale known as SRM or Standard Reference Method is used to convey the color of a finished beer. How that is done is a math equation that is not worth mentioning right now.’
Kim: ‘I just Googled it, it’s crazy.’
Jeff: ‘Maybe that can discussed further at a later time. So Kim just Googled it and I have my book. And I’m going to settle on a golden pale straw color. Your thoughts Toots?’
Kim: ‘9 on the SRM haha.’
Jeff: ‘So that would be a light amber. I don’t know I guess you could, I mean if you look at it with a light it looks more pale straw than amber. But if it’s not in the immediate reflection of a light it does have an amber color to it. Like a light amber.’
Kim: ‘That’s what I want to call it, a light amber. Plus I agree with the WWW, 9 on the SRM.’

Jeff: ‘So aromas…Very grape-fruity.’
Kim: ‘When you opened it in the kitchen I smelled grapefruit from the couch.’
Jeff: ‘Yeah that’s a good distance. It’s a very Cascade strong aroma base.’
Kim: ‘I’m getting pine and pear. The description said subtle pine but I’m getting a lot of pine.’
Jeff: ‘Definitely getting some pine as well. The grapefruit is more upfront where the pine is a mellowing background. Or where you would have a citrus bite, instead you have a mellowing pine accent.’
Kim: ‘The grapefruit is in the front, then you smell the pine and it’s paired up with the pear. It’s like holding the pear’s hand.’
Jeff: ‘Uh-huh, almost a combination of all three hops in there. One doesn’t dominate the other besides the grapefruit being up front. But that could be a rather strong aroma in itself regardless of the hop. But yeah mostly grapefruit but with a soft pine and a softer pear touch. The head on this is nice and maintains itself well. Which I’m guessing pays tribute to the CaraPils and White Wheat malts. And there’s a nice creamy residue left behind on the glass as well.’
Kim: ‘Hmm the description also said blueberry, I didn’t get any blueberry.’
Jeff: ‘That’s from the Mosaic hops. Yeah I’m not really getting any blueberry. But I guess now that I’m looking for it I might be picking up on some blueberry. Though if you really look for something you’re going to find it whether it’s artificial and self induced or truly there.’
Kim: ‘Well definitely the grapefruit, then I smelled pine, and then I smelled pear. But no blueberry.’
Jeff: ‘Yeah I’m inconclusive about the blueberry aroma. But then again you don’t have a good bond with Mosaics hop.’
Kim: ‘Yeah Mosaic hops aren’t my friend.’

Jeff: ‘So we got aroma down, appearance down. Let’s dive in and build snowman.’
Jeff: ‘Alright so first sip.’
Kim: ‘I got a wheaty, bready, malty feel first thing.’
Jeff: ‘Yeah along with the head and head retention it shows the malt strength. The mouthfeel is very medium. It’s very malty, very doughy in a way.’
Kim: ‘It’s the first thing I got.’
Kim: ‘This is an IPA?’
Jeff: ‘Yes it is.’
Kim: ‘I’m not getting a very hoppy bitter feel.’
Jeff: ‘Yeah one of the things I take into account is bitterness and an IBU rating. With an IBU of 75, I am not sure how much I agree with that.’
Kim:’ I mean I get a bitter hoppy taste aftertaste. But for most of the sip I wouldn’t have even thought this was an IPA.’
Jeff: ‘I’m not really getting too much of a bitterness at all.’
Kim: ‘After I swallow, like the aftertaste I get the bitter, hoppy, piney notes.’
Jeff: ‘Yeah so bitterness is tough to distinguish because it’s uhh…Some people believe the IBU ratings and some people don’t. But for an IBU of 75 I feel like Frosty could be possess more bitterness. Though it still has IPA qualities, bitterness is not really one of them. I’m not even getting a bitterness in the aftertaste.’
Jeff: ‘The front end of the sip is very soft and mellow in flavor. Very umm…’
Kim: ‘Smooth.’
Jeff: ‘Yeah very smooth. I’m getting more of a Mosaic feel in the beginning. Kind of umm…it’s almost weird to say but sort of a bubble gum, blueberry flavor combination.’
Kim: ‘So you’re getting blueberry but I’m not getting any blueberry at all.’
Jeff: ‘Different notes for different folks. Very mellow in the front end of the sip in the flavor spectrum. But very nice that it’s not overwhelming with a hop complexity.’
Kim: ‘I don’t want to say it’s simple. But it’s just…’
Jeff: ‘Easy.’
Kim: ‘Yeah that’s it.’
Jeff: ‘Nothing is jumping out at you, but it’s a good medley of flavors.’
Kim: ‘I don’t want that to sound negative. It’s good because nothing is overwhelming. You know sometimes you get a beer and it’s just too much.’
Jeff:’ Yeah I agree with that. The IPA’s can sometimes have an overwhelming nature with their flavors. With Frosty they’re more subtle.’
Kim: ‘Everything is nice and subtle.’
Jeff:’ Yeah you can either enjoy it as a beer that you can drink fast or take your time and enjoy the subtle flavors. Take the time to figure them all out. Which is why I enjoy writing my ‘Brewviews.’
Kim: ‘Yeah mine is half way gone, I’m drinking mine fast. It’s good!’
Jeff: ‘That’s why I got a 6-pack!’
Jeff: ‘But I am having some trouble distinguishing the flavors here. Not in a bad way, I’m really enjoying this still. I’m getting a little bit of blueberry and bubble gum in the beginning.’
Kim: ‘Now that you mention bubble gum I’m tasting it around mid sip.’
Jeff: ‘I don’t know. Mid sip I have more of a minty pine flavor.’
Kim: ‘Pine is definitely in the middle. First it’s bready, then the bubble gum, and then the pine ending with the bitter feeling.’
Jeff: ‘Yeah there’s a bit of a combination of pine and grapefruit in the back end. Which slips into the aftertaste, possessing a pine resiny feel to it. There is a slight bitterness I guess you could say. Though I’m thinking it’s more of a citrus bite from the grapefruit that works itself in the aftertaste as well.’
Kim: ‘I get the mint after the fact, after the sip is over. There is the aftertaste and then after that I get the mint.’
Jeff: ‘Hmm…With the aftertaste I’m getting a resiny mouthfeel with a medium body. Can really feel the wheat. I’m really digging everything about Frosty The IPA!’

Jeff: ‘It’s a very smooth IPA where the flavors aren’t all over the place, jumping out at you. The transitions between the flavors aren’t extravagant because they’re more subtle. Making it a very smooth and enjoyable IPA. That I could easily see myself having a couple. It’s not one I would jump for but one that could make the list if I was filling my fridge.’
Jeff: ‘It does have this characteristic about it that I’ve noticed in different IPA’s from Hamburg and that’s the pine flavor. I don’t mind it at all, it’s makes them rather more enjoyable for me. Gives note to its point of origin.’
Kim: ‘I think it’s crush able and light. It’s not overwhelming in body. It’s night time right now and I could picture myself with a 6-pack sitting on the porch.’
Jeff: ‘Yup, a beer gentle in nature. It’s 5.5% and has that feel to it.’
Kim: ‘I think it’s unique in that it’s an IPA but it’s not shoving hops down your throat and then a bunch of other weird flavors. It’s simple but solid and did what it said in the description.’

I guess that about does it. Frosty The IPA is a solid IPA that possesses an overall mellow feel it. The subtle flavors and medium body make it easily enjoyable for an winter occasion. Frosty will more than likely be accompanying me to some Christmas parties this year!